And not just any roadside diner, the Roadside Diner. I spied this place on my way to the apple orchards a few weeks back, so we decided to have a lunch date there today. In order to live in New Jersey, I believe the love of the diner is a prerequisite before residency status is officially granted. And how could you not love a place that looks like this? 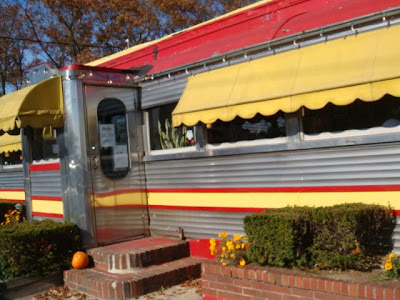 It only gets better and better on the inside: 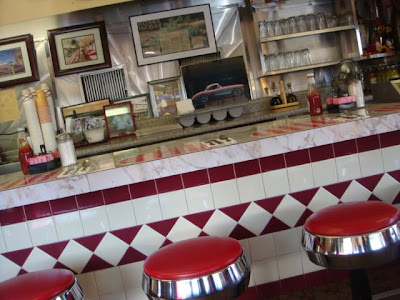 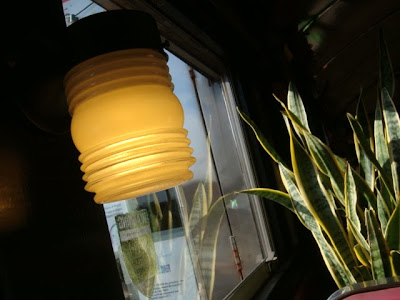 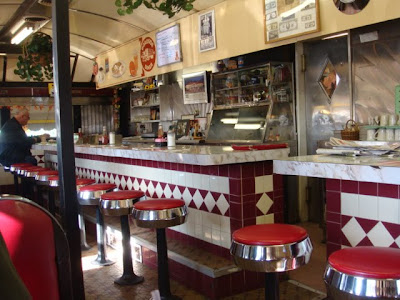 Mike ordered the special of the day, fried pork chops with split pea soup, mashed potatoes and veggies. “Are they real mashed potatoes?” he asked, before committing. Waitress, without missing a beat, “Is this a real diner?” Touché. And hello, all that food for $7.95? I felt like we had time traveled to a place where the blue plate special still hangs off the plate… 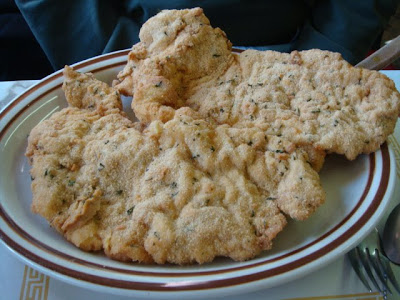 …and the people are actually nice: 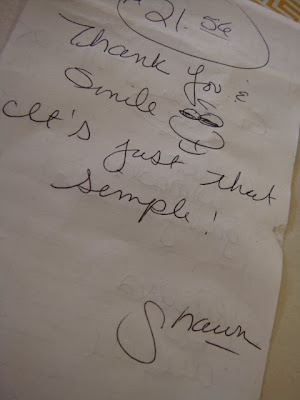 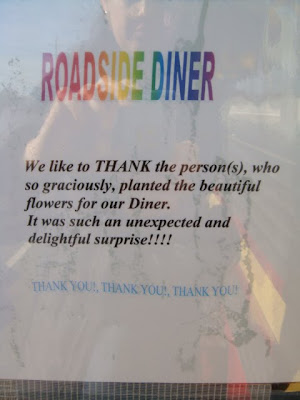 When we got home I did a little investigating. Turns out The Roadside Diner was delivered to the lot it sits in (at the intersection of Routes 34 and 33 in Wall, NJ) in the 1940s by the Silk City Diner Company. According to Wikipedia, “the diner (was) used for filming of a scene for the 1983 movie Baby It's You and also appears on the cover of the 1994 Bon Jovi album Cross Road: 14 Classic Grooves. In 2008, it is featured in the music video for ‘Girls in Their Summer Clothes’ by Bruce Springsteen.”

Well you just don’t get more Jersey than Bruce and Bon Jovi. Clearly The Roadside has “made it.” 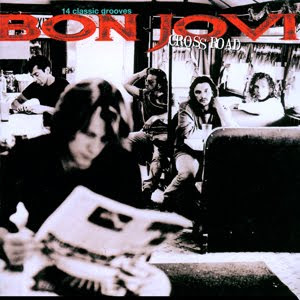 Maybe it was the slight hangover crisp fall air that made my fries and grilled Swiss on rye taste that much better. Or maybe it was the door that slid open to reveal a slice of Americana that made me want to indulge in the ultimate diner comfort meal. 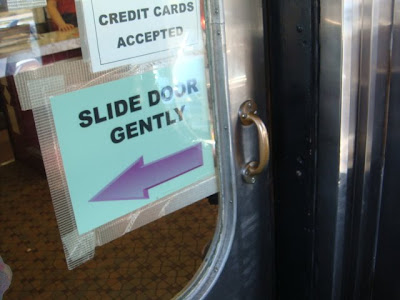 Whatever the case, I’ll be back. And I’m taking on the pancakes next time.

Thanks to everyone who commented on my last post...I didn't think there would be much of a "cross-over audience" but I'm pleasantly surprised that there are other Yankees' fans hanging their hats here. What a week!
Posted by Laura @ the shorehouse. at 11/07/2009

What a cool place. Only wish I lived closer...

Are you sure we aren't related?.....I thought I was the only person still left that uses the expression.....
"A Slice of Americana"....daughter can verify that!!

I love this place!! It almost doesn't matter what the food tastes like! (Almost.) Oh, and I couldn't comment on the last post...my husband is a Cubs fan...enough said. ;-)

That sounds like such a delightful place to visit and have a meal! It's so charming1

Oooooh! Pancakes... okay, now I'm hungry. Are they open all night? How far is it from Princeton to Wall? ;) Thanks for posting about this!! It looks fab!

I'm from NJ and I love diners!! I especially like the unique ones like the one you posted about. Old train cars are the best. I know of one called "Supper" that only serves just that - a comforting supper. Great post! :)

Diner love! The only people who love diners more than those from New Jersey are New Yorkers. I think that my first diner experience was before I could walk and talk. I have been to this diner before, and forgot how fun it was. I could do a road trip based on diners and be happy, but then, there is an entire food network show devoted to that..isn't there? Laura, this was a really fun post.
♥, Susan

That settles it. You are going to have to come visit me in St. A, Laura. I have breakfast in a diner almost identical to that one that a Greek family who has been in the restaurant business for a million years owns. The diner is relatively new, but they owned a downtown restaurant that's been there for eons.

Loved the story and the history of this one. I just love all of that shiny chrome, too! It's fun!

If I'm ever near there I'll stop in! Looks great. I really love your photos...seriously great shots!

Oh, that is WAY CUTE!!! Did I miss it somehow, or did you FORGET to tell us what YOU ordered? The country fried pork looks yummy!!! And I wanna come go there with you!

Roadside diner looks like a fabulous pace to stop for s bite.
I love diners too, Laura, and luckily Brooklyn still has a few good ones where we go sometimes for a hearty breakfast.

Did you ever go to Hot Dog Johnny's in Buttzville, NJ? It's been there since 1944. I went there every summer as a child because it was the half way mark to my grandmother's house in Pennsylvania. They are famous not only for their hot dogs but their buttermilk!!

That looks amazing I'd so love to visit it!! Thanks for sharing such a cool place xx

roadside diner? really?! i've driven past that place for YEARS & never stopped - maybe it's because I'm a die hard OB Diner fan, or really, a Pat's Diner fan (*tear!*)... or maybe it's because of the Adult Gift Shoppe next door that made my parents never stop there when we were kids...hmm...

A great slice of East Coast Americana from days past.

How fun is that? That diner looks awesome, and now thanks to your post I'm in search of pork chops, a swiss sandwich and fries. It's 11am. *sigh* I love little places like that, especially ones that've been there sine the 40's, not just imitating the 40's! Yum!!!

I sometimes forget that they're not everywhere. We were in Jackson, Wy. a few years back and it was 8pm.
We were all starving- nothing was open. My daughter said, "well let's just go to a diner then..."
No such thing.

I think every good night of my youth ended at 2am in some diner with a great meal.

What a neat diner Laura.I especially like the interior shots. Reminds me of the upstate NY diners my husband and I went to during college. So glad to see this one thriving.

Nice pictures and review of the diner.
-Diner News and History staff

Good fill someone in on and this post helped me alot in my college assignement. Thanks you as your information.