The November 2009 Daring Bakers Challenge was chosen and hosted by Lisa Michele of Parsley, Sage, Desserts and Line Drives. She chose the Italian Pastry, Cannolo (Cannoli is plural), using the cookbooks Lidia’s Italian-American Kitchen by Lidia Matticchio Bastianich and The Sopranos Family Cookbook by Allen Rucker; recipes by Michelle Scicolone, as ingredient/direction guides. She added her own modifications/changes, so the recipe is not 100% verbatim from either book. 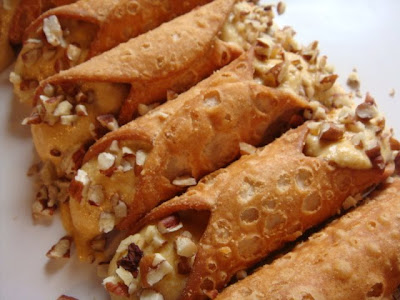 OK, here's the deal. I've always wanted to be a good cannoli maker. I grew up on Staten Island. My people are from Brooklyn. My first job was at a pretty popular Italian bakery. I mean, this should be in my DNA. But I never could make those shells. I tried. I gave up. I took a class at the Institute of Culinary Education. There were about 15 people in the class, a couple of them who baked/cooked for a living. We made delectable cannoli cream. Brilliant cassata. And pretty much every one of us made awful cannoli shells. Seriously. Awful. More Chinese won-ton than Italian cannoli.

So I panicked a little when Lisa Michele announced to The Daring Bakers that her challenge would be cannolis. But armed with chutzpah and a pasta maker, I decided to try again.

And I failed again.

I was a really pressed for time and I think my dough sensed that I was trying a little too hard. On Thanksgiving eve I had to surrender.

I decided to turn to the Italians. 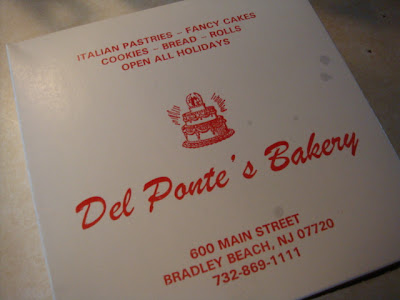 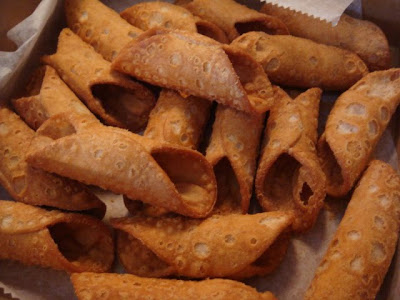 I know, I know. I'm a total cheat. I'm the Milli Vanilli of the baking world. And Lisa Michele's hosting the challenge. She's a baker! She's a Yankees fan! I could not let my bloggy friend and kindred spirit down. So I picked myself up by the bootstraps and to make it up to her I made my own ricotta cheese from SCRATCH on Thanksgiving morning. I even used her recipe. 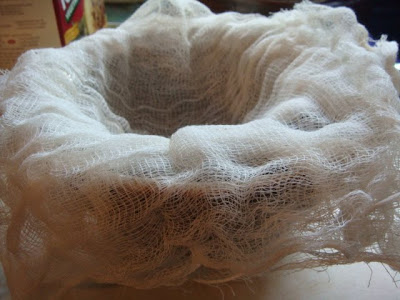 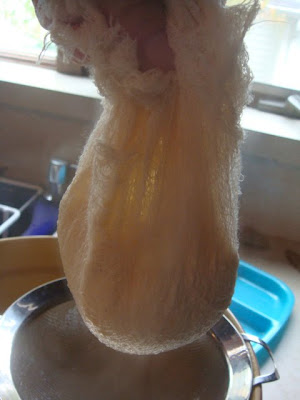 Click here to check out the recipe. It's really, really true: If you can boil water you can make ricotta! I can't wait to do this again.

The yield is really minimal -- four cups of milk reduced down to this: 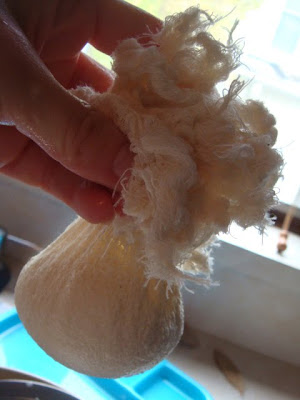 There was quite a bit of liquid left, and I think the next time I will use the remaining strained milk to make a bread pudding so I'm not so wasteful.

To further kiss up make it up to Lisa, I made her pumpkin cannoli filling. I am so glad I did! Delish. A little looser than a traditional cannoli cream due to the addition of the pumpkin so I'd definitely give it a little longer in the refrigerator to firm up. I've posted her recipe below. It would also be brilliant as a filling in a layer cake.

I toasted and chopped some pecans to dress my cannoli, in lieu of the more traditional pistachio. 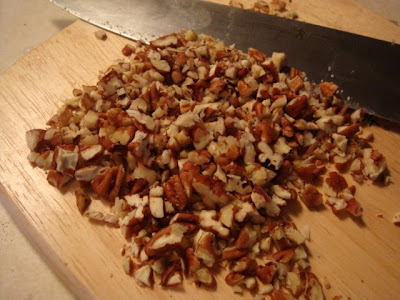 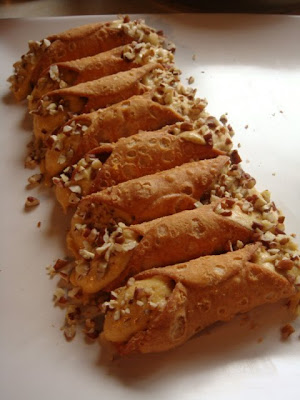 Does this mean I'll never try cannoli shells? I'm no quitter. Just like the bubbles on Lisa's picture-perfect shells, I too shall rise.

1. In a bowl with electric mixer, beat ricotta and mascarpone until smooth and creamy. Beat in confectioner’s sugar, pumpkin, pumpkin pie spice, vanilla and blend until smooth. Transfer to another bowl, cover and chill until it firms up a bit. (The filling can be made up to 24 hours prior to filling the shells. Just cover and keep refrigerated).

2. Fill the shells as directed above. I dipped the ends of the shells in caramelized sugar and rolled them in toasted, chopped pecans.

I love Cannoli I can't even imagine trying to make them. Kiddos to you for trying honestly the best part is the filling so your no cheat in my book. We were in Italy earlier this month and I ate so many!!

Good for you that you tried! Your attempt does not go un-noticed. This is your challenge and you can do it again. Kudos to you!!

They look wonderful. I love pumpkin. You are so much braver than I. Great job!

I am so impressed by your ricotta! I make some mean cannoli, but it involves store bought ricotta, lemon, chocolate & shells. What can I say? I cheat & I'm good at it.

"I'm the Milli Vanilli of the baking world."

I'm crying with laughter. Can you hear me in NJ??? You are the best! You need to be writing for SNL.

And regardless of cheating, the connoli look fabuloso! Is that a word in Italian, or do I just remember it from some 60's era food commercial??? Come to think of it, my housekeeper uses Fabuloso on my kitchen floor. ;-)

You are a chef extraordinaire, and I applaud your success with this recipe. Your Florida Mama is proud. I know the real Shorehouse Mom is, too.

*HUGE HUGS*..I'm so glad you took part in my challenge!! LOL@ the Milli Vanilli of cannoli shells! I was cracking up so hard my cat took off in fear! I love that you made the ricotta from scratch. For the pumpkin filling I should have added that the pumpkin should be drained overnight like the ricotta..or did I? I have to check again LOL

That said, your cannoli look mahvelous dahling, and just the fact that you tried to make the shells is all that matters. Thank you, thank you, thank you *singing* for being a friend..making cannoli once again...blah blah blah lol

Wow, pumpkin cannoli...fantastic! There was no cheating involved here...just a clever way to get it right...kind of like an open book test.
♥, Susan

Pumpkin cannoli? Umm, you know where my office is...

Oh man I missed Lisa's contribution to Daring Bakers? I would never have been able to make these though with my stress fractured foot that is giving me so much trouble ;-( I had to cook a lot of Thanksgiving dinner while seated with my foot elevated ...not an easy task..lol Thank gopdness my husband was able to help a lot.

Cannoli shells are so hard to make well without all the proper equipment ...your solution was the best! :-)

Hope you had a wonderful Thanskgiving!

You kill me... seriously, one person shouldn't be this funny.

As for making cannolis- really, don't you work in NYC? Who would actually make their own? (chuckling) "Leave it to the Italians." Okay, I will be laughing about this all week. When I was in third grade we had an international day and being 100 percent Irish, my mom sent me to the party with cannolis. Can you imagine? She knew what people would like. All my peers walked home with left over Irish soda bread.

And because I can't resist...,

"Take the gun; leave the cannoli."

wow, I wouldn't even attempt this

and you should be on tv, too funny

You are fearless, not a cheater, not a scaredy-cat - fearless. I know what I am asking you to bring next time we have a blog party! Can you bring the cannolis?
pve

cheating bakers..hahahahahahaha...even though you are the milli vanilli of bakers i love your savviness...good work sister!