The sick, and the bazaar. 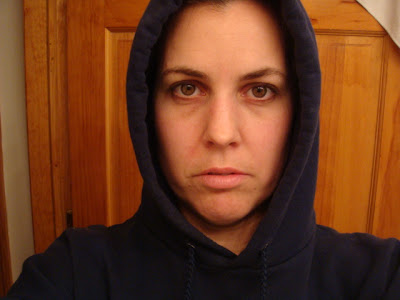 ...blah. Nothing says "summer cold" like a hooded sweatshirt on a 90 degree day.

To add insult to illness, when I was driving home from the shore house the other night my car was making a distinct and somewhat scary noise that I suspected was my front brakes. I took the car to the mechanic yesterday and turns out it was the brakes. I had none. (In the front, at least.) The other distinct and somewhat scary noise you may have just heard was my mother yelping as she read this.

Anyhoo, I'm OK, the car's (going to be*) OK, and all is well. I've got things in the bag. And I do mean that quite literally. A bag-for-three-bucks bag, in fact.

There was another Ladies' Auxiliary Bazaar in town. My old friend Kelly (she is not old, but our friendship is) came over for a visit and we took a stroll through the aisles and piles and PILES of stuff and "exceptionals." And yes; there was actually a table labeled "exceptionals." We took a gander at some other "exceptionals" -- the people who were stripping down to their swimmies to try on clothing from the masses of it spread over several banquet-sized tables. Our heads did a sort-of Linda Blair 360, and we had to leave. It was just...too much.

That is why I fear Kelly may be yelping right now as she's finding out that I returned the next day and did some shopping.

The next morning, my young neighbor friend/TGT (Thrifty Girl in Training) told me that after 12:30 prices would be slashed and anything you could stuff in a brown grocery bag (with the exception of the "exceptionals," natch) would be three bucks a bag.

So with TGT in tow I headed back on Saturday. I immediately headed to the Christmas table -- but on my way got distracted by this vintage Flamenco dancer doll. 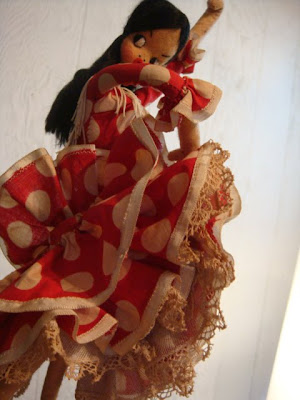 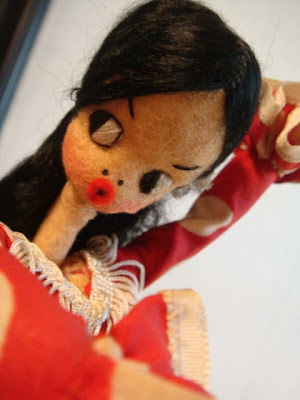 It's kind of odd, but in a cutesy vintage way (I think?), and my friend is a Flamenco dancer so I figured she'd at least get a kick out of it. (Happy belated birthday, Daniela!) I tossed it (her?)in the bag and moved on to Christmas.
I've had luck in the past at "bag-stuffing" events with ornaments. I immediately spied the boxes of balls, many newish but many vintage. Especially the fabulous bell-shaped ones: 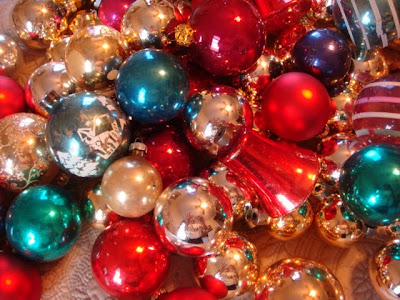 Even Flamenco girl let out an "Olé !" when she saw my final haul. 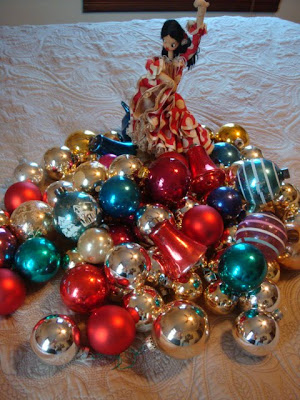 These will be used to stuff vessels and vases, and perhaps even make one of those ornament wreathes.
I lost TGT at this point but she reappeared to show me a fabulous straw hat. Which quickly went on someone else's head. I reminded her that this was like a competitive sport; grab first, think later. One of life's lessons learned.
A quick scan of the linen table (I wished I had stopped there earlier) turned up two souvenir bread warmers: 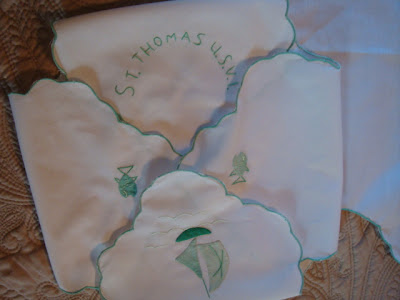 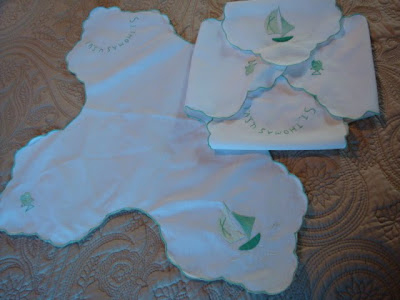 I'll use them as gift wrap.

And then for some reason I can not explain I stuck these copper prints in my bag: 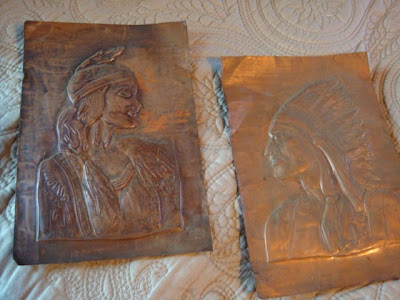 They're small (about 4" by 6") and oddly fascinating to me. At this point I realized I had likely jumped the shark, so I tucked my bag under my arm and headed home with TGT.
* After $340 is shaken out of my pockets. I should hope the car is OK at that point.
Posted by Laura @ the shorehouse. at 8/12/2009

Wow what great finds you had at the Bazaar love those Christmas balls and that dancer is so so cute. I read that you were shocked and sadden that we don't do 'brownies' in the Land of OZ. I think this is something I will have to fix straight away I think the Aussies don't have a very sweet 'sweet tooth' so to speak we like are treats a little on the less-sweet side so I will have to come up with an Aussie brownie after I do some research. We tend to do 'slices' made from sweetened condensed milk with lemon or caramel slices things like that.

Oh nooooo, you're sick?!?!? I'm sorry and I hope you feel better soon. At least you'll sweat out the fever much sooner than normal? Drink lots of juice.
xoxo

On the plus side, at least the no-brakes thing didn't kill you. That's a relief!

I just read Audax's comment saying that Aussies don't bake brownies. Is that true?! I had no idea. Life without brownies just wouldn't be as sweet!

I'm glad you had a good time shopping. However, I hope you feel better soon. It's lousy to feel sick during the dog days of August.

Ms. Shorehouse... I just emailed you to let you know I got my WONDERFUL gift today and love it. You are the sweetest. And I love all of your finds. The lips on that dancer are too funny... I love that shot of her. And you made out like a bandit with Christmas goodies. Yeppers. You did well, girl!

Hope my little package has made it to you.

Poor you....nothing worse then a summer cold...but I'm glad to see it didn't stop you from s..t picking as we used to call it up in Jersey...love the little dancer...daughter is a big bag suffer at the last day of book sales...I have never been so lucky...We went oneday two weeks ago to the Golden Nugget on a Wednesday....nobody was there and as we pulled into the lot it started to pour....I do have to make a point of going back...It looked like it might be good.....

I like the flamenco girl..., she seems to be expressing passion for what she does! And may you feel better soon.

Oh I am so sorry that you have a summer cold. They are the worst.

You certaninly have been a busy sickie chickie. Love your finds and glad the brakes were caught before you were yelping.
feel better soon
T

Ha! GREAT post title. Not fair that you look better sick than I look well.
Eat some raw garlic!
xoh

I hope you are feeling better ...summer colds are no fun
:-(

You have a great eye for the best bargains! I love the Christmas ornaments!

I'm glad you found out about the brakes before any trouble! Don't feel bad my son drove me all around the Colorado Rockies with NO brakes!! We were so lucky it was summer and nothing was slippery. I kept asking him what the funny noise was and he kept telling me "Don't worry." Geez.

Ugh! Nobody likes a summer cold! Do feel better!! I absolutely LOVE the flamenco dancer! and the bread warmers are terrific too-- I love that you're going to use them for gift wrap!

ps. you should totally make the christmas ball wreath!! I've always wanted to do that!

I've been sick too... hoping it will go away with new meds... ugh!
Hope you feel better too!
You are always finding treasures! Hope you are enjoying lots of time at the shorehouse!
Fifi

I'm so sorry you're feeling under the weather, but hey..you still look gorgeous :) Love that flamenco doll, and cracked up at the thought of 'it' shouting out 'ole!' lol

On another note..I have a present for you! You can pick it up here:

Just scroll to the bottom of that entry to pick it up :D

Finally, how 'bout them Yanks? That Red Sox sweep was sweeeeet!

I got such a tickle out of your post....and I LOVE the flamenco dancer.....she just looks happy dancin', doesn't she?

Thanks so much for ocming..please come again!

Oh, I'm so sorry you're under the weather! Love the things you got at the bazaar! I really appreciate your stopping by and leaving me a comment on my blog...I always look forward to your comments. They help to brighten my day ;o)

I'm so sorry about the summer cold. I hope you're feeling better. I'm very excited about your shopping haul though. Those ornaments are great! Color me green with envy. I let out a yelp when I saw them.

Just checking in to see if your feeling better...you and the car!!..Hope your cold is gone and your having a great weekend....

Feeling any better? I thought of you all the way up in Vermont! Check out the picture on my blog post. I think that it is getting to be time for us to do a little shopping....how's your schedule?
♥, Susan

Leigh of Tales from Bloggeritaville said...

What a haul! Girl, join me for Thrifty Thursday this week and link this up. JUst be sure and link back to me in the post, K?

Hope you have gotten over your summer cold, and are enjoying those great finds you got at the bazaar- you have quite the eye even when you are feeling up to par!

The vintage Christmas balls and the copper plates are AWESOME!!

Hope you are feeling better by now!!

(Side note to Audax...you say you Aussies don't eat very sweet things, and then you cite the caramel slice??? :lol: OMG, the sugar in those things burn my throat, lol! You guys do SO have a sweet sweet tooth! :p )

Hope you are feeling better! A hoodie in the summer- yes you were sick. I'm going shopping with you next time! You get the best treasures. xoxo

GREAT finds, especially the metal! Sorry you're not feeling great, I'm sure by now you're better!

What a lovely blog! I especially enjoyed your thrift treasure hunt. Stop by my new blog and say hello. Thanks for the inspiration! Jodi
http://thebarefootshutterbug.blogspot.com/